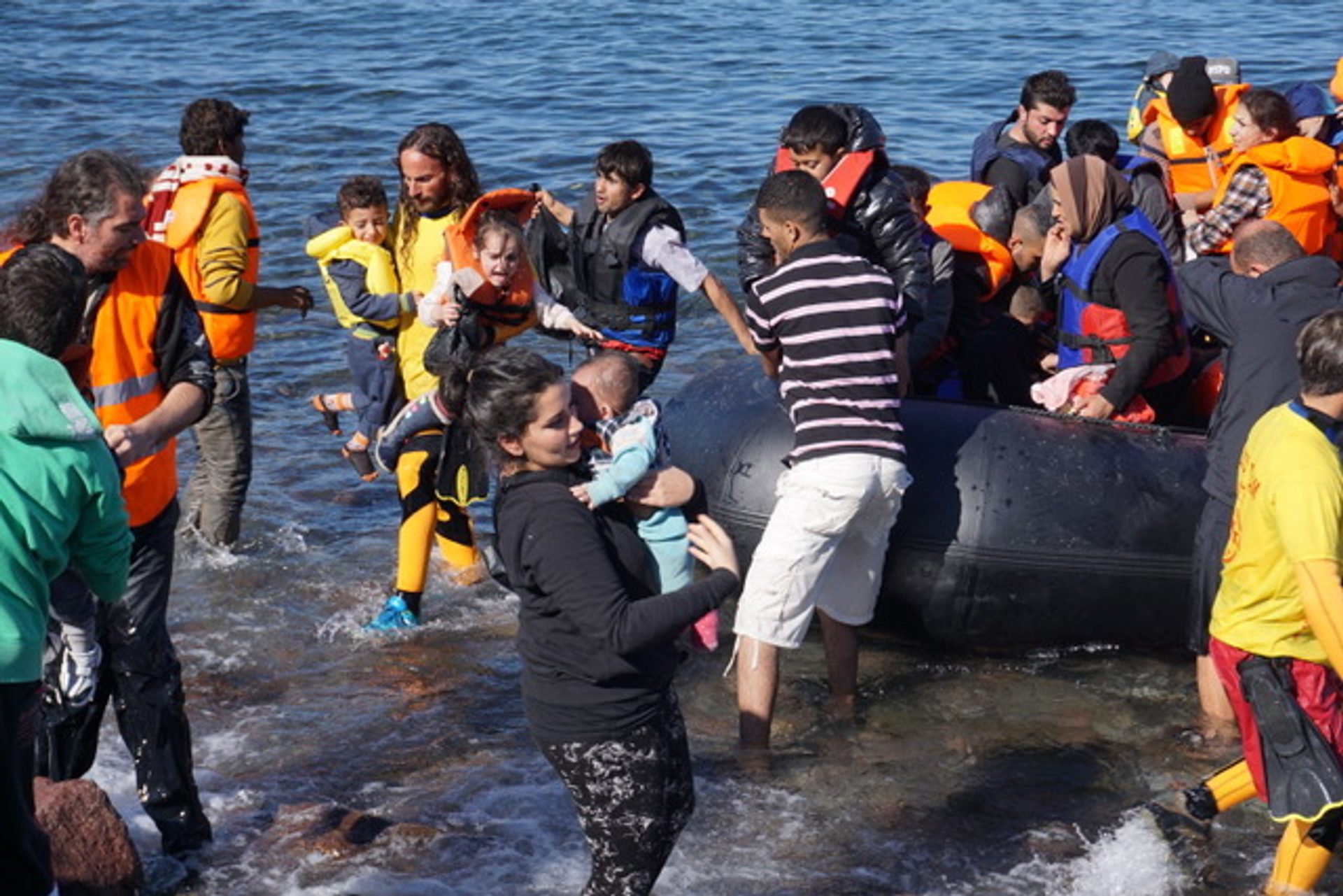 I AM YOU, a nonprofit organization, provides dignity, compassion, respect, and a chance for a future to thousands of people fleeing war and stranded in Greek refugee camps. I AM YOU needs your help!

Since April, I AM YOU has created life-saving programs and spaces for learning and expression through music, carpentry, painting, and a wide range of activities for children and teenagers.

I AM YOU's mission is to continue improving the conditions for the thousands living in refugee camps around Greece, expanding its programs to impact more lives and create wider change, advocating for those displaced by war and persecution.

I AM YOU seeks to sustain and grow its core programs:

and needs funding for:

The organization was born on the island of Lesvos in October 2015, where over a million men, women and children arrived after risking their lives crossing the Aegan sea in rubber dinghies from Turkey.  As the crisis evolved from immediate emergency response to long-term support during the spring of 2016, I AM YOU moved its base of operations to the Attica region, providing services to nearby camps.

October 2015: I AM YOU was founded by childhood friends Rebecca Reshdouni (pictured below) and Damian Ardestani from Stockholm, Sweden. 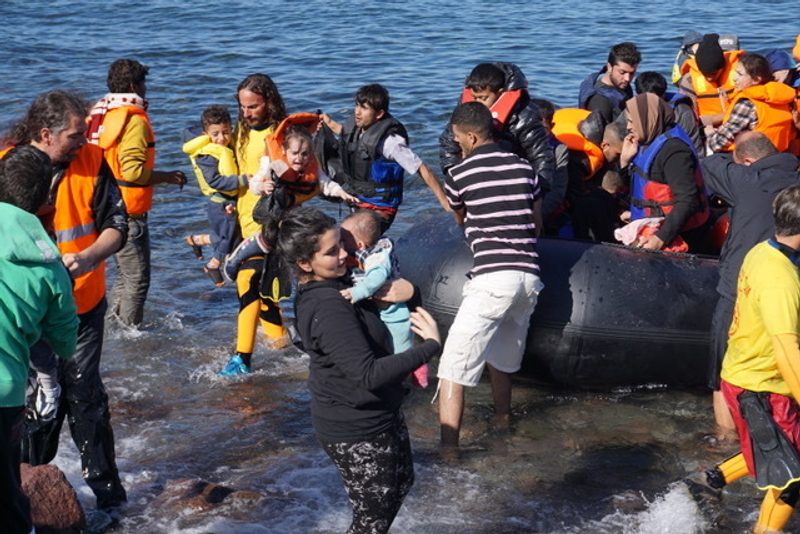 October 2015: After a meeting with Peter Bouckaert of Human Rights Watch, Rebecca and Damian visited the island of Lesvos, Greece to learn more about the crisis, but ended up volunteering by the shores, receiving overloaded rubber dinghies with shocked, disoriented and terrified men, women and children onboard. 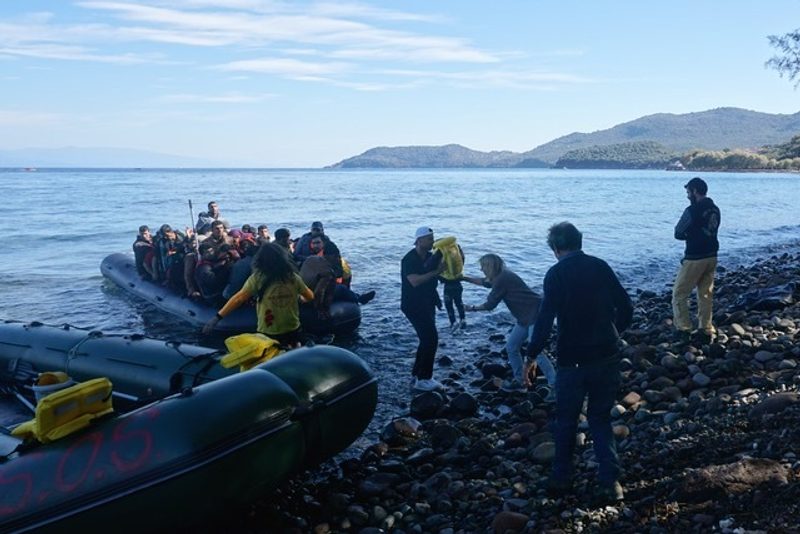 November 2015: Damian, who is a native farsi speaker supported medical personnel with translation for Afghan and Iranian refugees. 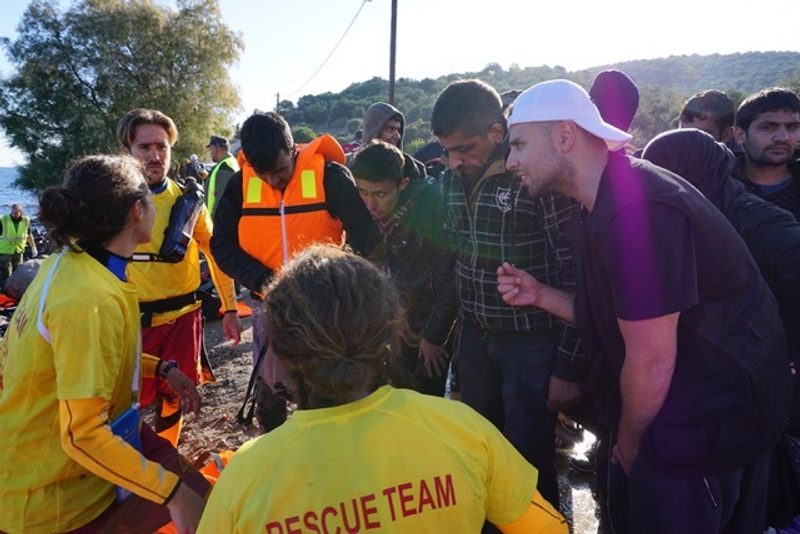 November 2015: Rebecca and Damian returned to the island with their first team, consisting largely of Farsi and Arabic speaking translators. 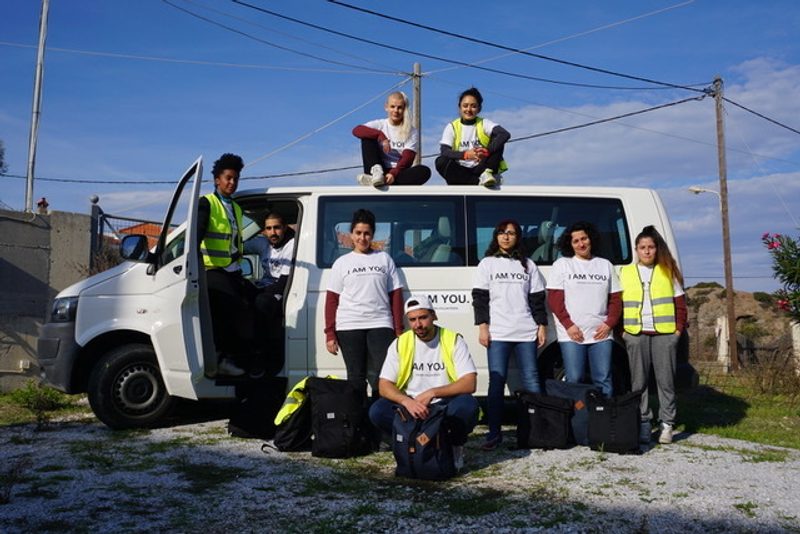 December 2015: I AM YOU now had a steady flow of dedicated and trustworthy volunteers which led to it being asked to co-manage the vulnerable families compound inside the Moria transit camp in Lesvos - a former detention center characterized by its concrete walls, barbed wire and armed riot police.   Over 8,000 displaced men, women and children were stuck in camp, awaiting registration under horrid and life-threatening conditions. 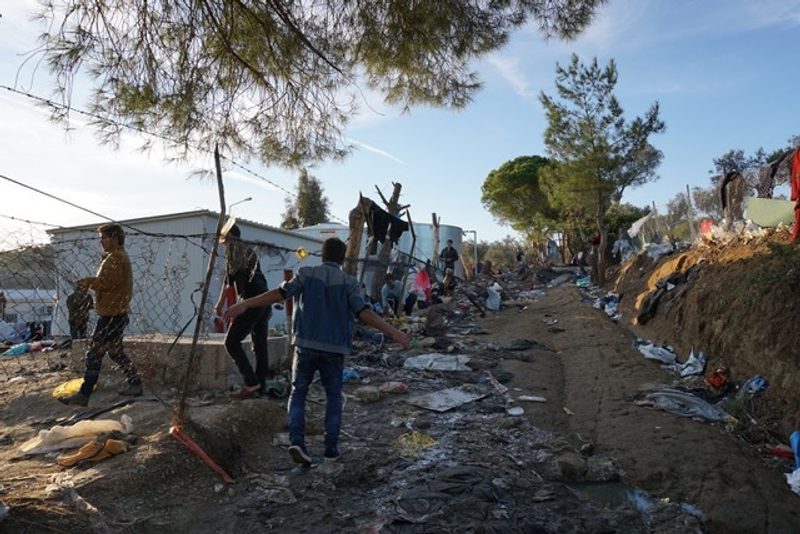 December 2015: Each night, the team provided shelter for hundreds of families with small children, having to turn away thousands of others due to lack of space. In November and December alone, I AM YOU helped provide shelter for over 50,000 people, to a large extent small children in the vulnerable families compound. 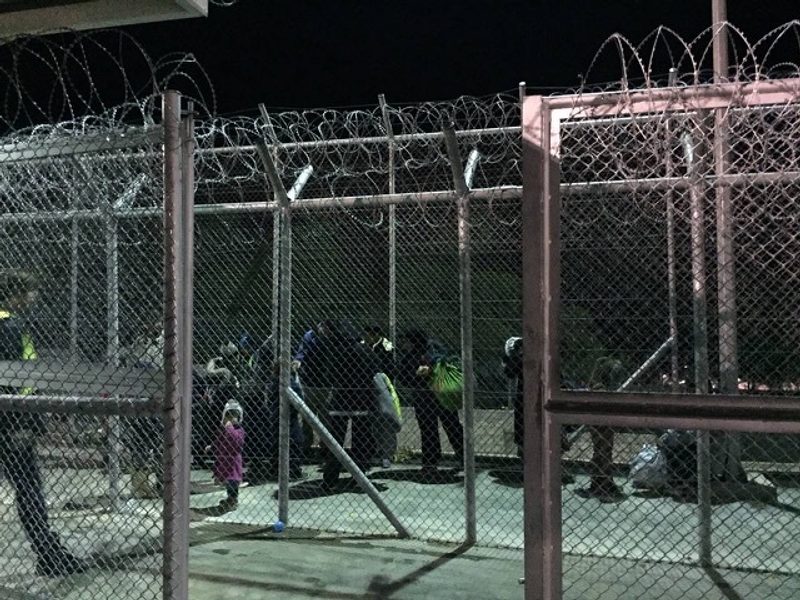 January 2016: Following the new year Moria transit camp changed dramatically as the Greek ministry and UNHCR took over operations while improving conditions for the thousands passing through.  The Danish Refugee Council (DRC) was invited to take over the general management and I AM YOU was asked to manage the shelter allocation. 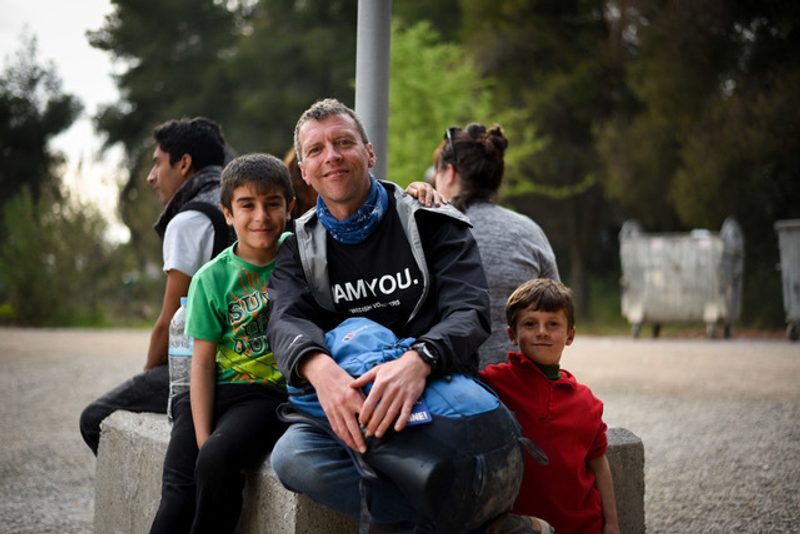 January 2016: I AM YOU partnered with DRC to create efficient systems for housing, protection, monitoring, and new arrivals, and worked together to significantly improve these systems. Besides working in shelter management, I AM YOU provided the camp with translators who assisted with crucial information to the refugee population, crowd management with the Greek police, and any other support needed. 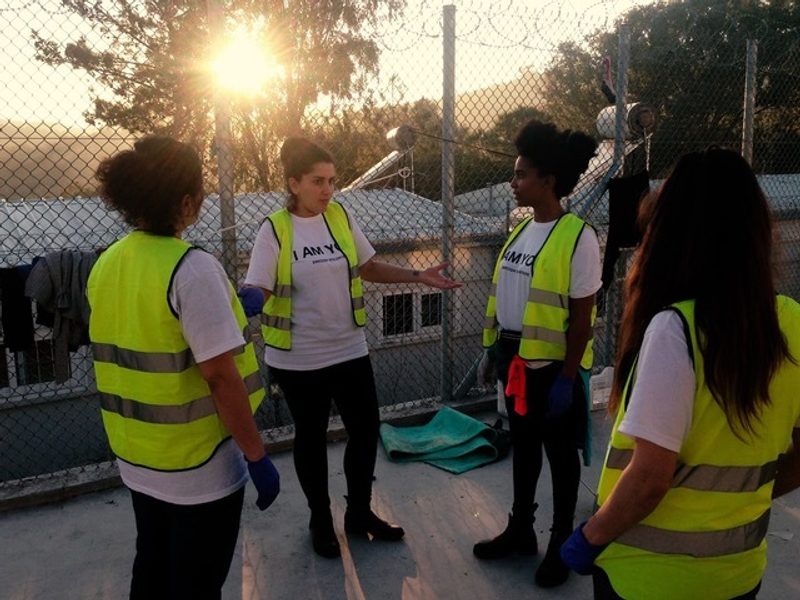 February 2016: I AM YOU expanded its working hours to cover shelter allocation and translation services around the clock, seven days a week. In addition co-branded vests were revealed, declaring I AM YOU official partners of DRC. 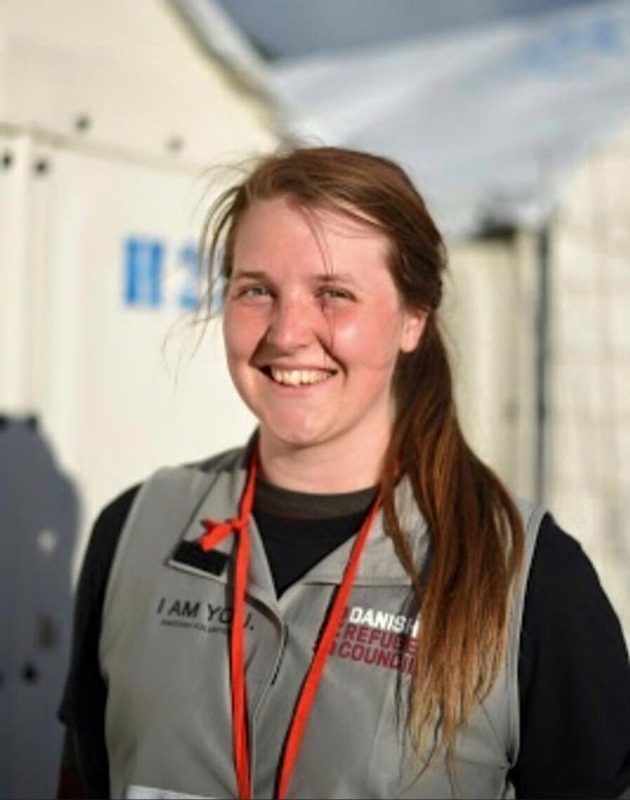 March 2016: I AM YOU was present every single day until March 20, 2016, the fateful day that Moria camp was closed to NGOs and once again turned back into a detention center, following a deal between the EU and Turkey. 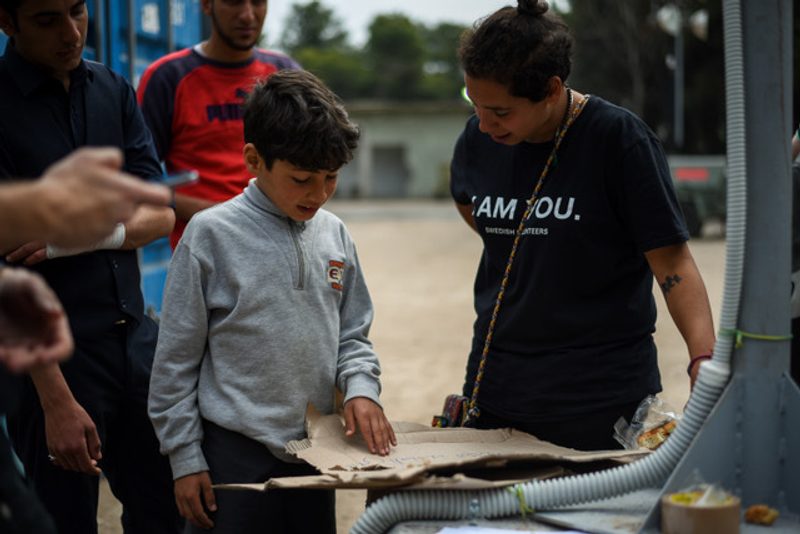 March 2016: Due to major changes in Lesvos the team travelled to different parts of Greece, Turkey, and Lebanon to make an assessment of where its services would be most needed. 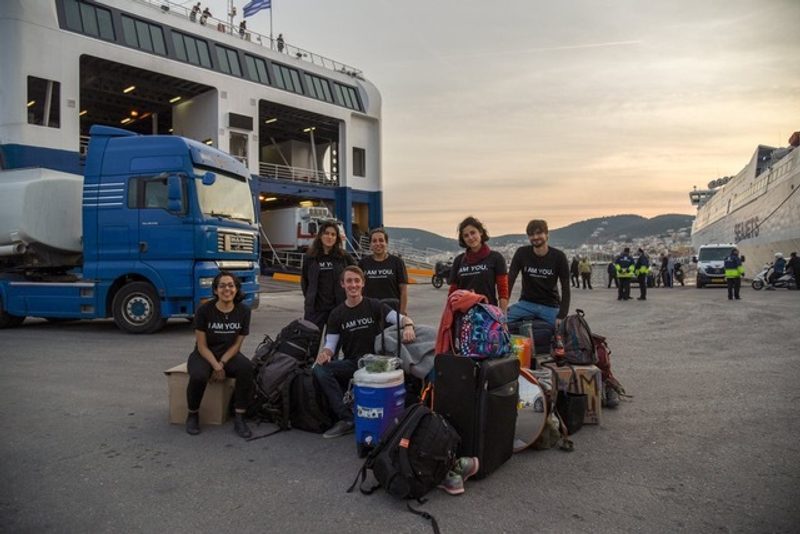 April 2016: I AM YOU moved to the Attica-region on mainland Greece to help improve the long-term camp in Ritsona and Inofyta. 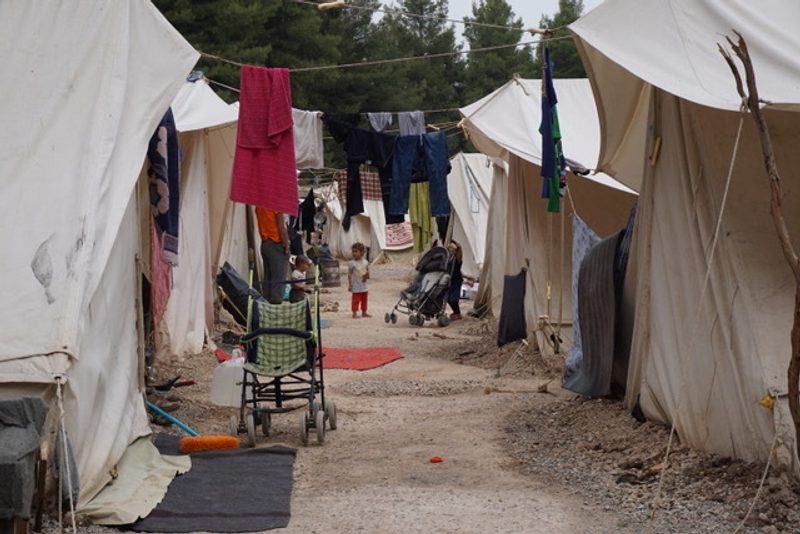 May 2016: Founders and board members met in Greece to decide the future of the organization. Operations were divided into four programs; Education Support, Youth Activities, Arts & Recreation, and Camp Services. 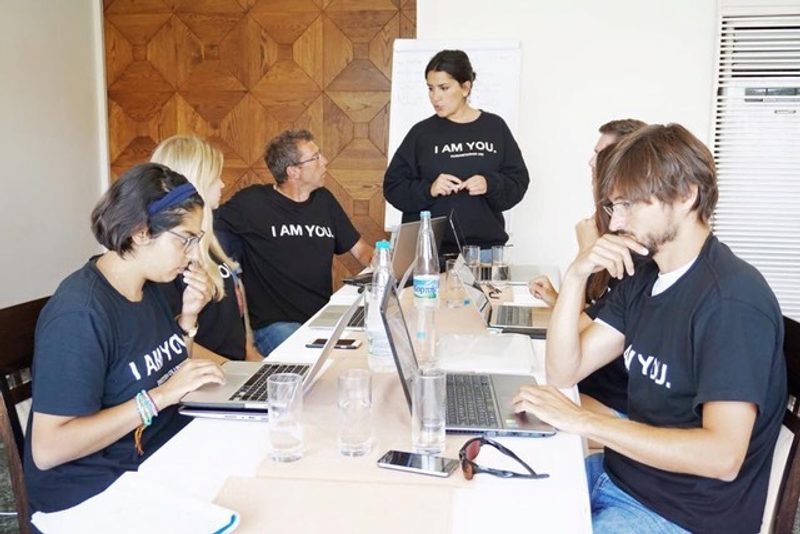 May 2016: Plans were laid out to build a school structure in the Ritsona camp with tents serving as several classrooms as well as a children’s library and a painting studio. The painting studio opened by the end of the month and is highly appreciated by the residents in camp, many of whom are artists. 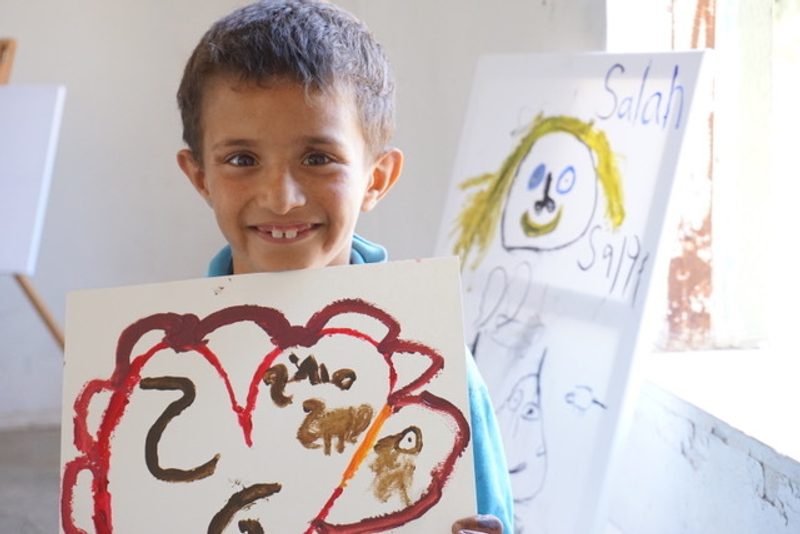 June 2016: I AM YOU’s Children’s Library opened and offered storytelling sessions as well as access to children’s books in multiple languages. 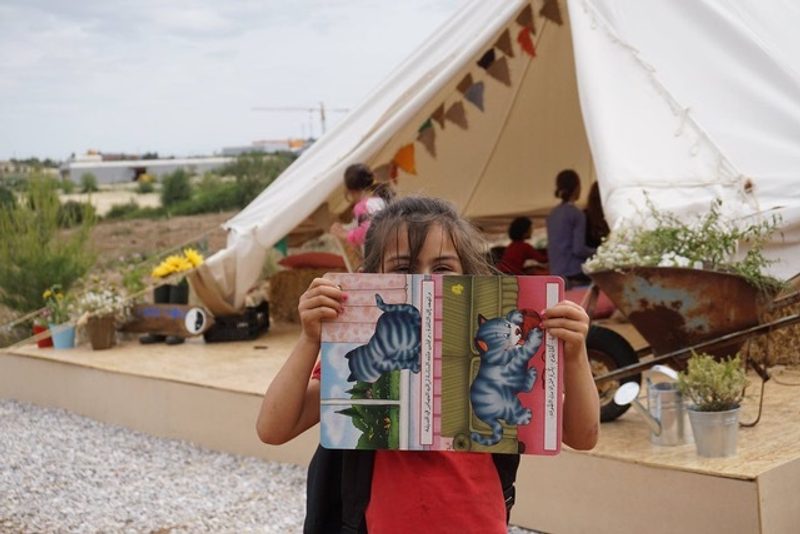 June 2016: Swedish singer/songwriter Julia Frej developed the “I AM MUSIC” program that arranges music workshops for all ages in both Ritsona and Inofyta camp.

July 2016: I AM YOU’s carpentry workshop opened, allowing camp residents to build their own furniture. Within a few weeks, many impressive creations were revealed across the camp. 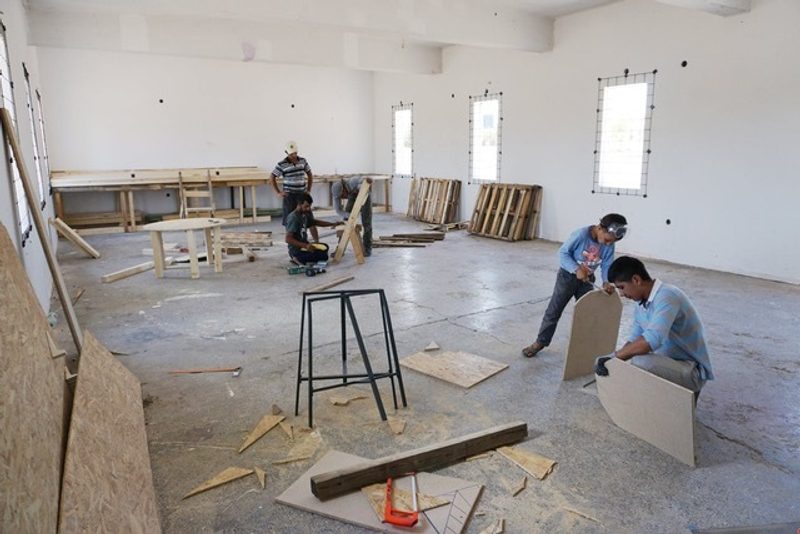 July 2016: Due to the severe heat in camp, I AM YOU arranged daily trips to beaches for all residents in Ritsona camp. 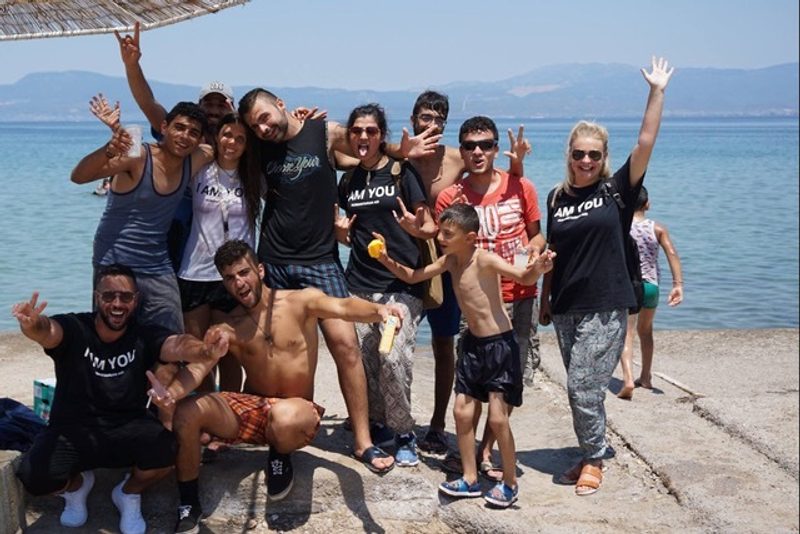 July 2016: Grand opening of I AM YOU’s 3-classroom learning centre in Ritsona, providing a full curriculum for children including lessons in English, Greek, German, Mathematics, Science, Arts and PE. During the afternoon, conversational classes and language lessons were also provided for adults. 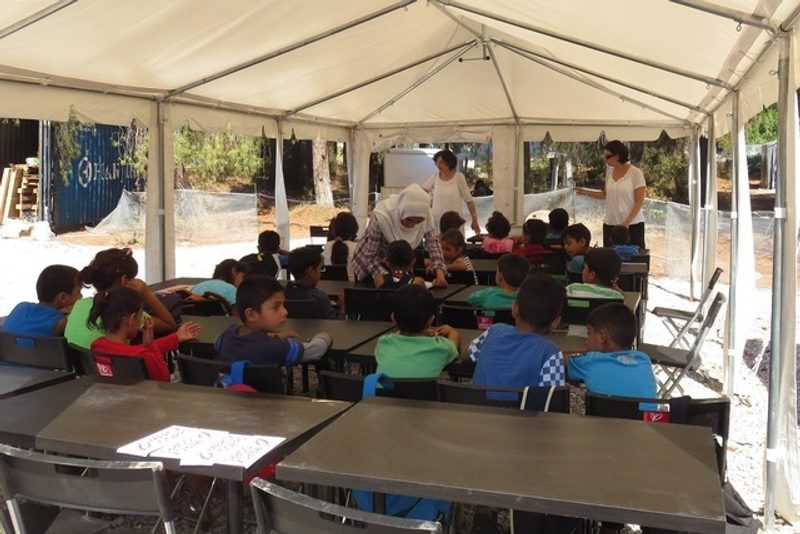 August 2016: Co-founder Damian Ardestani set up weekly jamming sessions with the resident musicians in camp. A large music tent was raised and a recording studio was set up several times, capturing the residents' music. 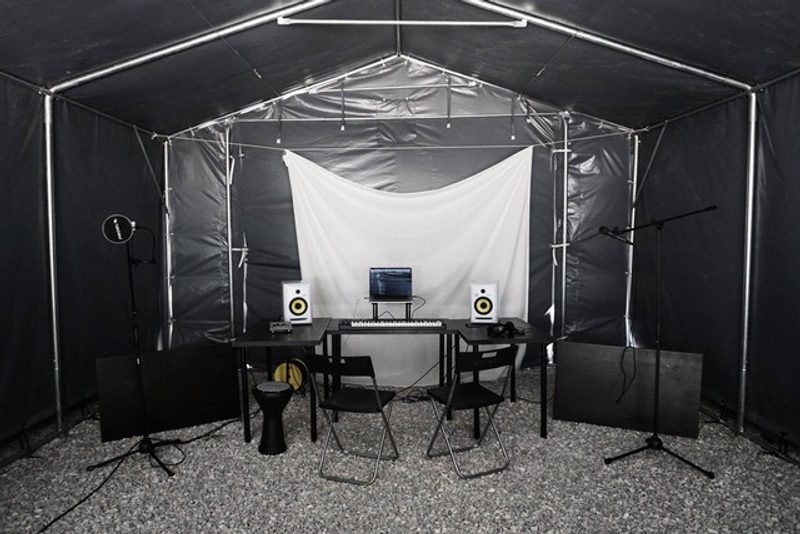 August 2016: I AM YOU’s pre-school opened for the youngest children, offering learning activities through play. 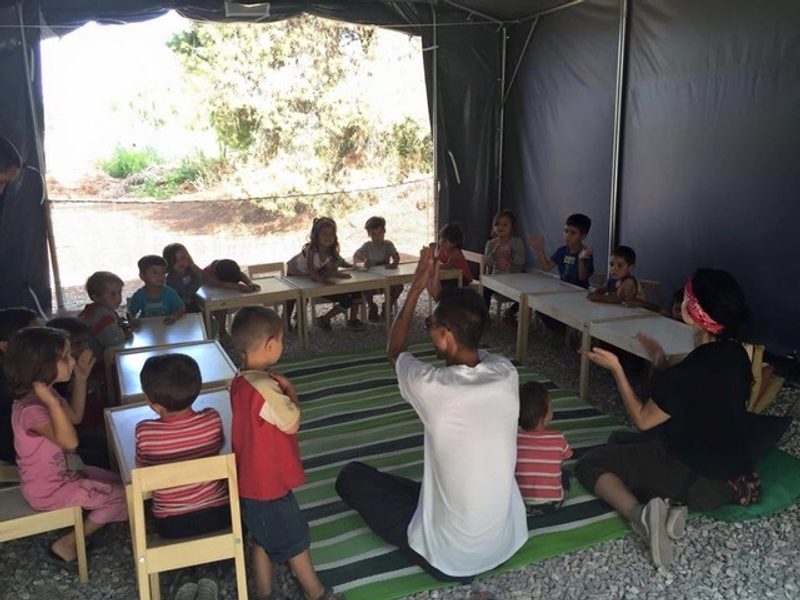 September 2016: After months of development in partnership with the Red Cross, I AM YOU became the official non-emergency medical transportation service provider for the entire Ritsona camp. Every day, multiple cars with Greek translators and Arabic speakers transport patients to and from hospitals and doctors appointments. The volunteers also provide assistance with navigating through the medical system and translating during the appointments. 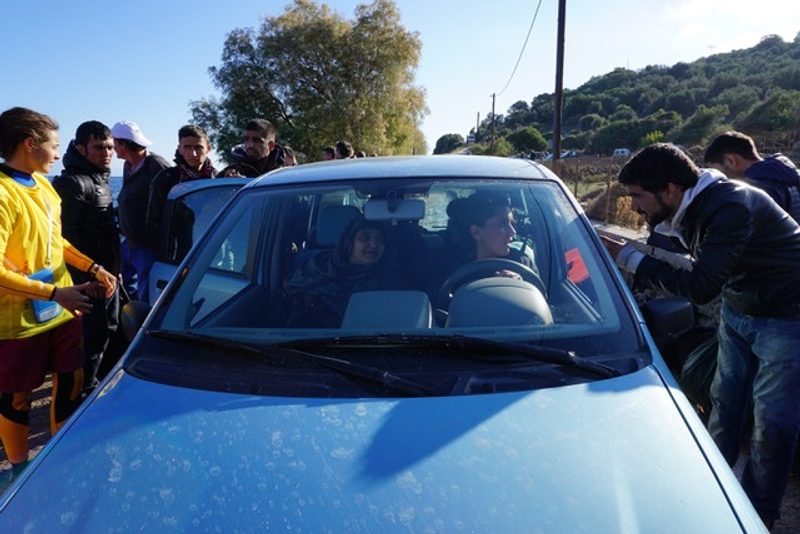 September 2016: Up until now, all ground operations had been led by founders Rebecca Reshdouni and Damian Ardestani. For the first time, a non-founder was appointed to lead the organization on the ground. Katina Saoulli, a UK-resident from Cyprus was promoted to the position after months of volunteering and displaying her excellent leadership skills. 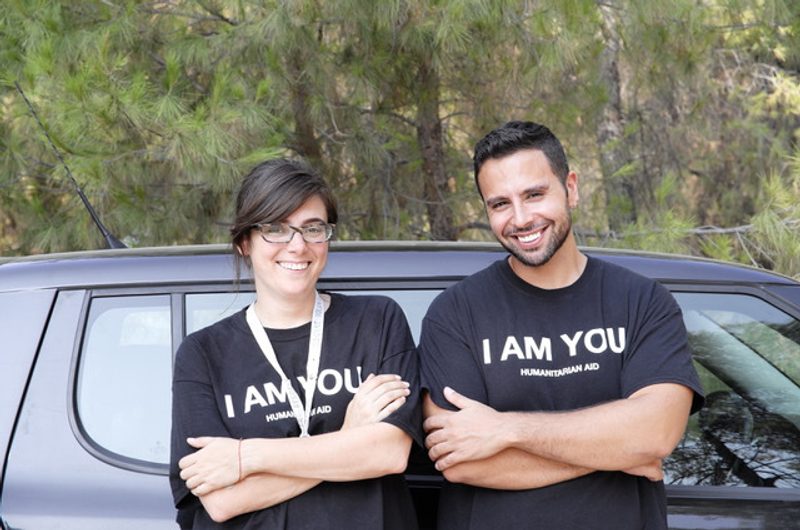 October 2016: As part of our new Community Engagement Program, resident teachers that ran I AM YOU’s learning centre received I AM YOU t-shirts and were officially welcomed to the team. 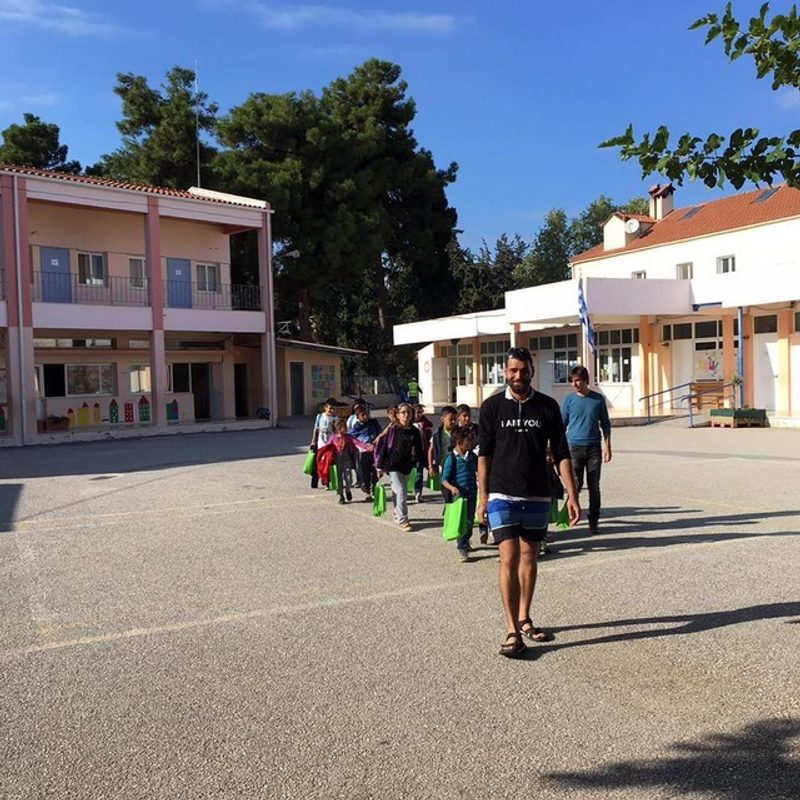 October 2016: I AM YOU turned one year old and stands strong as one of the leading volunteer organizations in Greece - known for it’s hard-working, skilled volunteers and innovative humanitarian aid programs. 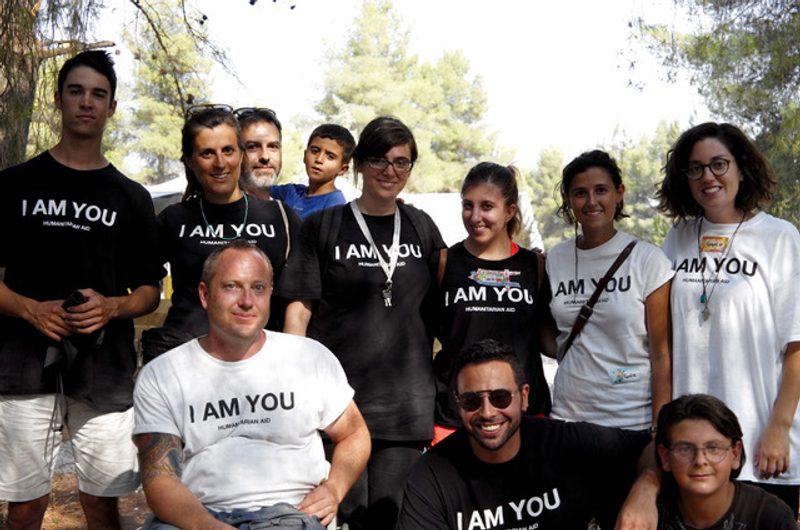 More About the Founders: 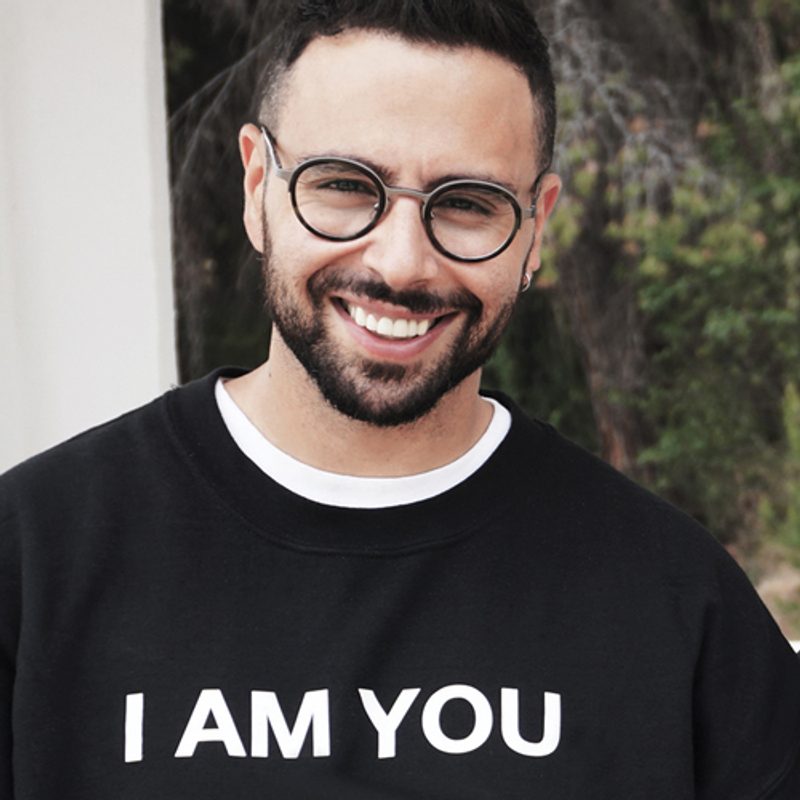 Damian is responsible for leading the Advisory Committee and the operations in Greece. He is a recording artist and music producer known as XOV with extensive management expertise from a former career as a CEO and entrepreneur. After gaining global recognition for writing music to The Hunger Games soundtrack and reaching chart success in Europe, he started a successful record label in partnership with Sony Music and Universal Music Group. His family came to Sweden as refugees from Iran when he was one. 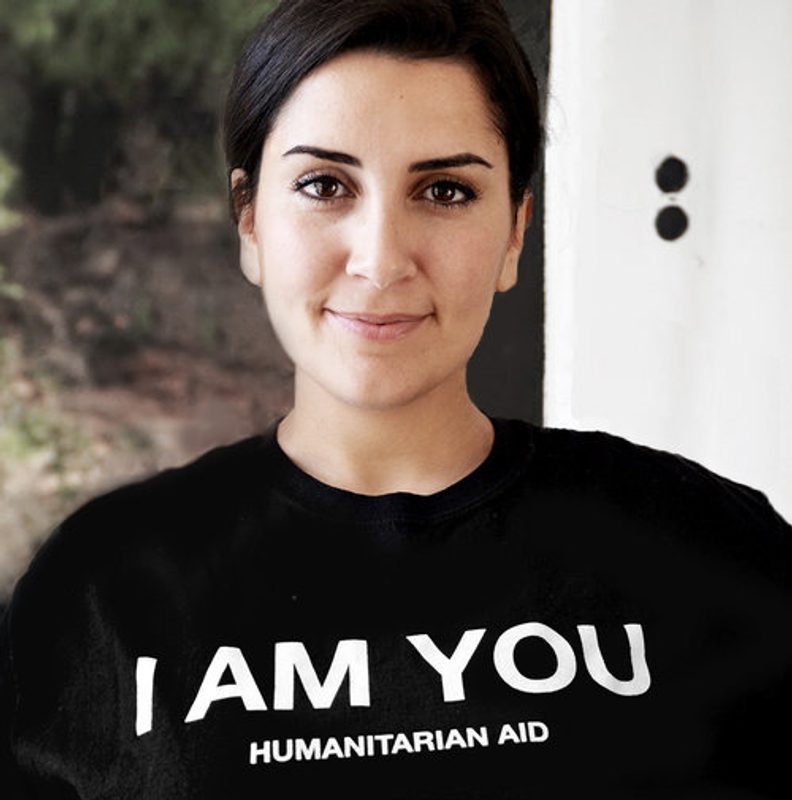 Rebecca is responsible for international partnerships and the operations in Sweden. She has a wide range of experience in project management as well as a deeper understanding of immigration matters from her work at the Asylum Procedures Unit at the Swedish Migration Agency. Additionally, Rebecca gained excellent leadership and communication skills through her experience from the financial services sector. Her family came to Sweden as Armenian immigrants from Iraq and Syria before she was born.

The Sustainable Markets Foundation is a 501(c)(3) nonprofit charitable organization based in New York. The foundation works as a fiscal sponsor to provide financial and administrative support to a variety of environmental causes.

I AM YOU has appointed Sustainable Markets Foundation (SMF) in New York as the fiscal sponsor of the organization, making I AM YOU eligible to receive grants and donations from foundations and organizations and individuals in the United States and abroad. Operating under SMF, I AM YOU abides by all U.S. charity laws and regulations. Donations to I AM YOU through its fiscal sponsor SMF are tax-deductible as allowed by law.  SMF's federal tax ID is 13-4188834.

Created By: I AM YOU